A fun and intelligent Volkswagen ad

The other day at one of my lunch spots, I was idly flipping through the newspaper while my sandwich was being prepared, and I came across a fun Volkswagen ad: 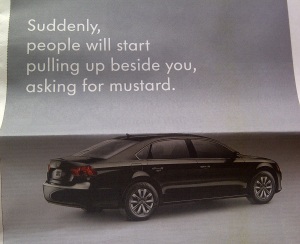 The Volkswagen brand has a fun and quirky image, and their ads are often playful

Alarmingly, I immediately thought of this reference, rather than the actual pop-culture original.  [For the back-story of Grey Poupon, check out the first four paragraphs of Malcolm Gladwell‘s, “The Ketchup Conundrum”, an article which also appears in What the Dog Saw]

Volkwagen’s got some good ads going these days, and they’re succeeding in part because they’re really playing to the quirkiness of the brand.  What I like about the Passat ad above is that:

Volkswagen can’t lead with a straightforward luxury message because it would deviate from their brand and alienate their target market.  What happened the last time Volkswagen went all luxury on us?  The Phaeton.

By most accounts I’ve read the Phaeton was a classy, high-quality luxury automobile, but no one wanted to pay 60 grand for a VW.  I think I’ve seen two in my life (and I’m not convinced it wasn’t the same one, twice).  I’ve seen more Tesla Model S, and it’s only just appeared in Canada!

Anyway, I find advertising simply fascinating – from the good to the bad to the “huh?” – so from time to time I’m going to be posting examples that catch my attention in one way or another.  Of course, feel free to share your own faves in the comments section.

Tagged with: Volkswagen
Posted in Advertising, Everything, Marketing