Home › Everything › The Running Man

A few years ago, I hated running.  Now I’ve changed my tune: I grudgingly respect its existence, and occasionally hang out with it.

When I was a tallish skinny youth, someone made the mistake of telling me, “You’d be a really good runner”.  So at some point I went out for a run, and to my dismay realized that running is hard.  I was a decent runner, but I was at a point in my life where I didn’t really like doing things at which I didn’t immediately excel.  I’m dismayed that I was like that, and implore everyone to encourage your kids’ effort and get them comfortable with failure being a necessary step on the path to excellence.

But anyway, running was hard so that was enough of that¹. 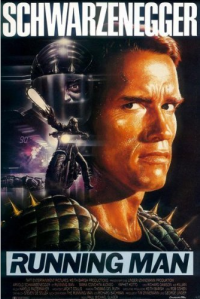 I suspect if I watched this movie now, it wouldn’t be as entertaining as it was when I was 15.

Since then I’ve had a hate/tolerate relationship with running: I recognize that it’s great for fitness, and I rely on fitness during soccer…so I jog a bit during the season; however, I still don’t enjoy it.  You’re just kinda plunking along step-by-step and you end up back where you started (physically…I’m not getting into metaphors).  I have lots of friends who run, and admire them for it without being able to relate, exactly.

Switching gears (wait for the joke), I’m in the market for a car (that was the joke).  I’m setting my sights on a Subaru, and wouldn’t you know it, Subaru has a promotion: run in a Subaru-sponsored event and get $750 off your car.

Well, I might not like running, but apparently I can be bought. So three weeks ago I signed up for The Halloween 7k in Stoney Creek.  Now, I may not like running, but I know enough to make the most of a situation, and I also don’t want to come out of the race thinking, “Goodness gracious me, that was a lousy time.”  Self-critical much?  Yes.

I should say that in the last decade I’ve run in one fun-run, and it taught me several things:

Not wanting to drive all the way to Stoney Creek to spend a miserable time grunting through a run, I embarked on a training attempt.  I’ve read enough and know enough folks who coach fitness activities on the side to have some understanding of how to do this, and two things that are important are: don’t be ignorant, and interval-training is the best way to get results.  I also missed the last month of the soccer season with a banged-up knee, so I had another reason to be careful.  Being mature and responsible and such, I decided to exercise some discipline, not force the issue, and gradually get ready for race day.

The loop we take while walking our fuzzy little girl is exactly 3.6km, so that’s mightily convenient.

On October 10th, I embarked on my “test out my knee and see if I can run the loop a) without stopping and b) without my knee swelling up” run.  17 minutes and 30 seconds later, wheezing and feeling like blacking out, I came up the driveway with two knees of equal and normal size.

Exuberant from this minor victory, I had a few thoughts: “that works out to a 35 minute 7k”, “that wasn’t really that hard” (by this point I could stand up straight again), and “I should set 30 minutes as my race goal”.  Ah, exuberance and ignorance, a powerful combination.

The next day I went out again, for my “just complete 7k in as much time as it takes and don’t be an idiot by wrecking your knee” run.  Putting my knowledge of intervals into practice, I exercised discipline by running for a kilometre or two and then walking for a hundred metres or so.  45 minutes later, I got home.

It was at this point in my “training” that I worked out that the world record marathon pace would finish the 7k in about 20 minutes.  That is just unreasonable and nuts, but would remain in my mind.

Over the coming weeks, I stuck to my plan (which included a rest day every so often in which I worked on my pathetically weak core):

It was at about this point that I was joined in my training by a celebrity.  As ridiculous as it sounds to say/type/express, I found motivation in Britney’s new song.

Britney’s new track is just like good running: simple and with a fast pace.

Yes, yes, yes, I know how silly that is.  But here’s why it worked for me: I generalized the message of the song away from one of materialism to one of achievement; that is, if you want to achieve anything, then you have to work for it.  Seriously.  As I said before, in my youth I wasn’t always one to work hard; but getting my butt kicked by UW changed that (perhaps too far to the other side, in fact).

There are very few people who have attained “success” in life without working incredibly hard, even the so-called overnight successes usually had many years of hard work and failure before hitting it big.  So, when I hear Britney’s track, I’m not really focusing on the lyrics; rather, I’m thinking of how important it is to work to achieve one’s goals.  I’d foolishly set a goal of a 30 minute race, and I was going to do my best to achieve that.  Plus the song’s got a catchy high-tempo beat.

I also somehow strained an abdominal muscle (who knew I had them!), which led to lingering discomfort, but those are the strains.

This morning, I awoke surprisingly bright-eyed at 5:15am.  I had a light breakfast of egg-bread with raspberry jam and a small glass of water, packed up my stuff, and then my wife and I headed out into the SNOW STORM!  I’d seen the forecast and knew it was going to be some unpleasant mix of snow, sleet, cold, wind, etc…but c’mon.  We picked up Nicole’s sister, who was running both to support me and to cap her triathlon season, and drove an hour first through the snow, then through rain, and always through the wind, to Stoney Creek.

Hanging out beforehand kept me relaxed, and I stuck to my pre-run routine of no stretching or warming up of any kind.  Plus, my race bib was #23…a prime number, that’s gotta be a good sign!  By the time the race began, the rain had mostly subsided to an annoying cold spit carried into our faces by a moderate wind.  I’d realized that 30 minutes was unlikely, so I was hoping to come in around 33 minutes, which would be consistent with my training.  The course had kilometre markings, which were helpful, and they let me relate my progress to where I would be (and how I had felt) on my training runs.  At each marker, I had some distinct thoughts:

I came in at 33:13, and I’m extremely happy about the run.  I had fantastic pace control, ran the whole thing, and was consistent with my training times despite the inclement weather.

As it happened, with this being the inaugural Stoney Creek Halloween run, the field was quite small (98 people), and in my age bracket I finished second.  The top two runners both finished in under 26 minutes, and apparently put up quite a neck-and-neck finish.

Look, I know 7km isn’t a long distance, but I signed up for dubious reasons and then made a little project out of it.  A part of me is tempted to see if I could get really good with some serious training, but a larger, more vocal, part of me doesn’t enjoy running.  However, I will admit that I felt great after the race, having fulfilled a commitment to myself, supported a good cause (the race was partly for Autism Ontario), and run a solid time.

Finally, the race itself wouldn’t have been possible were it not for the organizers and volunteers, many of whom stood for a long time in miserable weather to ensure we had a safe race…so thanks to them!!

Melissa and I, pre-race. Hey, we both have prime numbers!

The last few metres. Note the umbrellas in the background.

Another great Running Man.  This guy has a better core than I do.

¹Well, not quite…in grade 9 or 10 I was on the cross-country team at my high school, but being on the team and contributing to the team’s success are two very different things.  Luckily, we had some splendid runners and the team was deep enough that we never needed to incorporate my time into the team results.  Looking back, I honestly can’t remember my motivation for joining the team, but it was probably someone thinking that I’d be good at it due to my physical   lankiness.]

2 comments on “The Running Man”