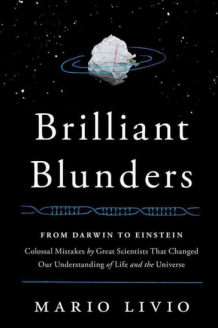 “How could a man of such intellectual powers as Kelvin be so sure that he was right even when he was dead wrong?  Like all humans, Kelvin still had to use the hardware between his ears – his brain – and the brain has limitations, even when it belongs to a genius…On one hand, his virtuosic command of physics and his ability to examine potential alternatives with a razor-sharp logic were second to none.  On the other…due to his overconfidence, he could sometimes be completely blindsided by unforeseen possibilities.” (Brilliant Blunders – p95 and p72)

Origin: Mario Livio was Jon Stewart’s guest on the September 4th 2013 episode of The Daily Show.  I love science, and I seem to have a thing about mistakes being a necessary part of grand achievement, so I’d ordered the book before the interview was done.

Summary: In Brilliant Blunders, Mario Livio (himself an astrophysicist) provides a compelling narrative to explain why some of history’s greatest scientific minds committed immense and avoidable blunders.  Livio chose five examples for his book: Charles Darwin, Lord Kelvin, Linus Pauling, Fred Hoyle, and Albert Einstein, and moves seamlessly from one to the next.  In the preface, Livio tells us that his objective is simple, “to correct the impression that scientific breakthroughs are purely success stories” (p1).  On the same page he tells us that, “while this book is about some of the remarkable endeavors to figure out life and the cosmos, it is more concerned with the journey than with the destination.”  In Brilliant Blunders, Livio really does take us on a journey through not only the recent scientific age of humanity, but also through the universe from its very inception.

My Take: To be completely honest, I had the wrong impression of the book when I purchased it.  I mustn’t have paid close attention to Livio’s interview on The Daily Show (I was distracted by popping onto Amazon to order the book), because I thought the book was going to be a compendium of mistakes or accidents in science that led to breakthroughs (e.g., discovery of penicillin, picking up the cosmic background radiation, etc.).  So at first, I was a bit confused and then slightly disappointed.  However, these feelings quickly changed as I really “got into” the book.  Livio has done a tremendous job not only telling some fascinating tales, but also in providing the reader sufficient background context to illustrate and explain the nature of the various blunders without overwhelming us with detail.  Nevertheless, you should still be prepared for some crash courses in, among other things, genetics, celestial mechanics, cosmology, chemistry, and various other fields.  I find all of these topics immensely fascinating, so I appreciated Livio’s thoroughness.

Throughout the book, I had an ever-growing sense of wonder and awe, as Livio has chosen five tales that truly illustrate the means by which our enormous library of knowledge has come to be.  The folks profiled in Brilliant Blunders (and not just the “main characters”) were true pioneers (it also struck me how the same names popped up throughout many years of history and across many subjects).  They found a set of current conditions (e.g., life, the universe, everything) and asked themselves how such reality had come to be.  I take for granted the things that they, and others, discovered, and while I’ve done so with a more-than-average understanding of the work of history’s scientific trail-blazers, I have a newfound appreciation for their efforts.  I truly feel privileged to have received some insight into their circumstances, and yes, their blunders, and I am grateful to Livio for sharing these stories with us.

I should point out that I found Brilliant Blunders to be more enlightening than entertaining, but I do not feel this is a loss.  Plus, once I got going, I found myself returning as soon as I could, because the histories Livio gives us are simultaneously remarkable, interesting, and instructive.

Read This Book If: You like science, the scientific method, and human discovery, or want to feel better about the mistakes you make in your own life.