What do you do if you’re a pro sports team and your mascot looks like something out of nightmare and has the unfortunate tendency to frighten children? Assuming that you decide to make a change, there might be a temptation to do so quietly; after all, making a change means admitting that you made a mistake the first time around.

Well, if you’re the NBA’s New Orleans Pelicans, you instead eschew subtlety and turn your mascot redo into a tremendous PR campaign. 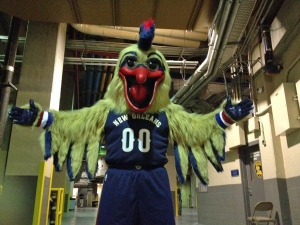 Agh! He’s bearing down on me with maw agape and a crazy look in his eyes!! (Photo Credit: New Orleans Pelicans..

A couple of weeks ago, the Pelicans announced that their mascot, Pierre the Pelican, had injured his beak while playing pick-up ball with some other mascots. I mean, that right there is pretty funny, but it was only the beginning. The poor guy would now have to undergo reconstructive beak surgery. The press release announcing the upcoming surgery included a shot of Pierre suffering the injury and some comments from the team’s physician, Dr. Matthew McQueen: “This will be a rather unconventional surgery for us, I am not sure we have something to compare this to. It will be quite complicated and will require the use of some unconventional tools an instruments to reconstruct his beak.”

Again, still funny, but did they stop there? No! Also included were comments from Carolyn Atherton, the curator for birds at the Audubon Zoo in New Orleans: “We do see a lot of head trauma cases with pelicans. Since they are plunge-divers, sometimes they’ll hit sharp objects and a lot of times, they’ll have tears in their pouch or even eye problems. We’ve had quite a few pelicans we’ve treated for injuries similar to Pierre’s. After they’ve been treated, they’ve all come back looking bigger, stronger, faster and ready to take on the world.”

Later, the team released an image of a post-surgery Pierre, wrapped in bandages but giving the thumbs-up to indicate a successful procedure. 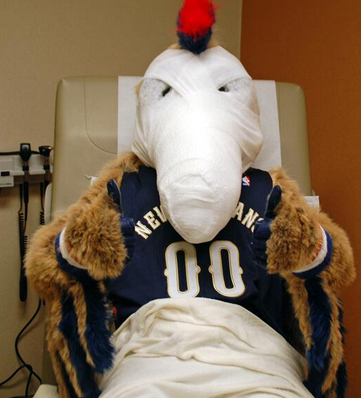 Finally, on February 12th the new-look Pierre (with sane eyes and a less threatening beak) was revealed to the world. 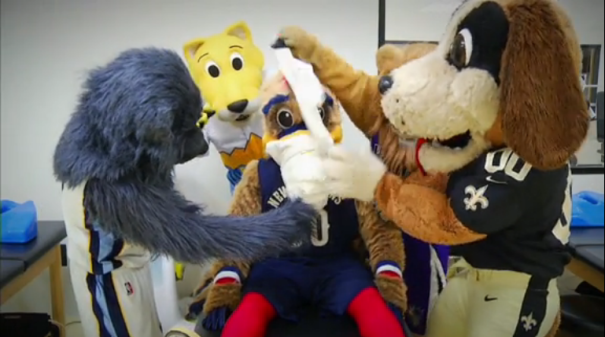 Pierre gets some help from his buddies – click on the image to see the two-minute video.

I just love this story – the Pelicans could’ve quietly changed mascots, but instead they crafted an entertaining campaign that got people talking.

However, while this new-look Pierre is pretty neat, he’ll never be able to touch the world’s best mascot: The Inflatable Raptor. In support of my assertion I submit for consideration:

World’s. Best. Mascot. (Photo from Grantland) On that note, this article is a terrific tribute to the craft of mascottery (mascotship?).