Home › Everything › Books › The Performance Curve: how to perform at your best

The Performance Curve: how to perform at your best

“In graduate school the most important psychological concept I learned is something called the performance curve.” – Sports psychologist Gary Mack (Mind Gym – p29).

In Part I (“Welcome to the Inner Game”) of Mind Gym, there’s a chapter called Know Your Numbers that explains the performance curve and its implications for athletes. This section struck a chord with me, as I was able to relate my own experiences to Gary Mack’s explanations of how stress impacts performance and how understanding that impact can enable us to perform at our peak levels.

Like most of the concepts in Mind Gym, I believe the performance curve is applicable to non-athletic endeavours, too, and I wanted to share it.

In Mack’s representation of the classic performance curve, the axes are labelled one through ten. I’ve mixed it up a little bit in my image below by relating the numbers to common descriptors of stress and performance, but the idea remains the same. In Mack’s words, “As athletes become stimulated their numbers on both lines increase. When they achieve peak efficiency – when they are performing at their best, physically and mentally – they are at the top of the human function curve.” (Mind Gym – p29)

“As athletes become stimulated their numbers on both lines increase. When they achieve peak efficiency – when they are performing at their best, physically and mentally – they are at the top of the human function curve.” (Mind Gym – p29) 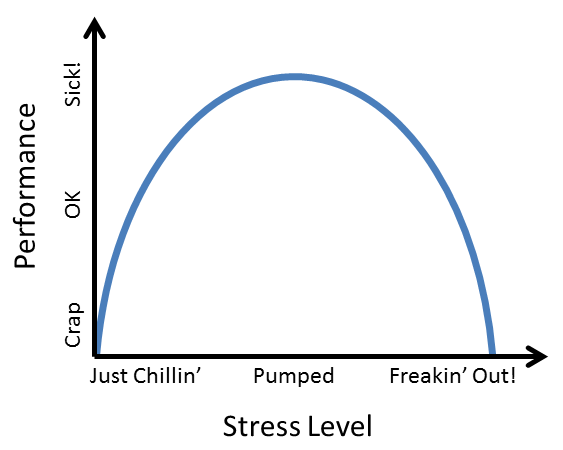 The classic Performance Curve, but with fun labels instead of boring numbers.

Mack explains that everyone responds to stress slightly differently: the same physiological things happen, but to varying degrees, and the impact on performance is different. As a consequence, it’s important that each of us understand our own curve so that we can recognize warning signs that indicate that we’re about to stray from an optimal level. Quoting from Mack: “An athlete’s ideal numbers – the optimal level of performance – depend upon (1) his or her temperament; (2) the time or length of the event; and (3) the nature of the task.” (Mind Gym – p30)

He continues, “Under stress, some people are cardiac responders – their heart rate goes up. Some are skin responders – they begin to perspire. Others begin to breathe rapidly, feel their stomachs churn, or feel their neck and back muscles tensing. These are all physical early warning signs. Mentally our minds start racing. A little voice begins whispering negative thoughts.” (Mind Gym – p31)

The rest of the chapter contains supporting examples from the world of professional sports.

As I was reading Know Your Numbers, I was giving thought to my own experiences…particularly those on the soccer pitch. Over the years, I’ve noticed that many of my best games and moments¹ have been against teams that I know well and which include players who are teammates on other nights of the week. I’ve also become aware of a tendency to be especially conservative against teams and players that I don’t know well, and this tentativeness makes me less effective as a defender.

Lately, I’ve been giving this topic some thought: why am I tentative against unfamiliar players? For some context, I’ve played solid, successful D against some top-notch players – guys who’ve played provincially and professionally. If I can defend them, then surely the odds are in my favour against some random local player, even if there are exceptions who are especially talented.

I’ve played solid, successful D against some top-notch players – guys who’ve played provincially and professionally. If I can defend them, then surely the odds are in my favour against some random local player, even if there are exceptions who are especially talented.

In thinking of all of these factors in the context of the performance curve, I realized that I’m relaxed against familiar opponents and I tense up against new ones. Why? I’ve thought of two reasons for the relaxed, composed play: first, I know these players’ tendencies, so I’m well-prepared; second, since I’ve played or continue to play with them, they know I’m a solid player and I don’t have to be concerned that a mistake here or there will compromise their view of me (the ol’ fear of failure thing). I’m comfortably pumped to play against my friends, right in the realm of peak performance. However, against an unfamiliar foe, the uncertainty mixes with my desire to shut them down and puts me too far to the right on the performance curve…and the result is that I drop back conservatively (since I don’t know what they’re going to do, I don’t want to be caught on a fast turn) and give them too much space in which to operate.

Over the past few weeks, though, particularly since reading Mind Gym, I’ve been consciously managing my stress level and my play has picked up noticeably despite a grueling schedule in which I play six games in 11 nights (vacations and injuries mean that these are often high-minute games, too). During the matches, I focus on what to do, rather than what to avoid (remember, the body is more likely achieve what’s on the mind…so make sure that what’s on the mind is positive), and I remind myself to aggressively stick close to the opponent and shut him down.

I’ve also taken other steps that might appear trivial, but seem to be helping. For instance, on the drive to the games, rather than listening to pump-up music like hip-hop or something like Rage Against the Machine, I just take it easy and jam along with Sam Roberts (kind’ve folksy contemporary rock) or Metric (pop alternative, maybe?). This music is up-tempo, but not crazy, and the tempo gets me going but the music itself keeps me relaxed.

I’ve also been giving thought to some of the non-soccer scenarios in which applying knowledge of the performance curve is handy, so that I’ll be prepared. You can give it a shot, too: just think about what makes you feel stress. An important presentation? A meeting with a client? Delivering a speech at a wedding? These are all situations that can cause stress, so being able to assess yourself in advance and prepare to notice warning signs will help you stay close to your peak performance level.

“I had no chance of controlling a game until I first controlled myself.” – Baseball hall of famer Carl Hubbell

¹The best goal I ever scored was a screaming, Cristiano Ronaldo-esque shot from just over half in a full-field indoor game. We were playing against a team we know really well (many of us play together on different nights), and I was so in-the-zone that the play is really fuzzy. Normally I wouldn’t have even attempted a shot from that distance, but I received the ball from our keeper while the other team was making an ill-timed substitution, ran up-field and unleashed a laser to the near-side top corner. Sadly, the moment after releasing the shot I turned to run to our bench for a substitution…so I didn’t even see it go in =(

4 comments on “The Performance Curve: how to perform at your best”