The journey was long and tough, but that made me stronger. Not once in my professional career have I faced anything that has even remotely stressed me out the way that UW did.

[This is the third of a series of posts in which I explain my journey from a small town, through the University of Waterloo, to a career in technology marketing. Part one is Sharing my experiences with today’s students; part two is My Story, Part 1: The Accidental Engineer.]

When we last saw our hero (me), he had just (deservedly) failed his 1B term of Computer Engineering at the University of Waterloo.

In this part of the story, we find out how I turned things around on my way to achieving academic success and embarking on a career in, ultimately (so far), marketing.

I expect that there are lessons in here, for those who care to find them.

Unfortunately, while my average was high enough to pass, I had failed the foundational course of my program (ECE 100), and that carried with it an automatic fail for the term. D’oh.

Over the next four months, my perspective would change a bit.

I was on a co-op term at the Canadian Space Agency, working in a lab that was building a micro-satellite, and on pretty much my first day we were talking about magnetic fields and capacitance, and all this other stuff that was actually part of the course that I’d just failed. This experience showed me that ‘all that academic crap’, actually mattered. Maybe this shouldn’t have come as a surprise, but it did. I really credit this job with helping me to turn things around.

Not knowing anyone in the area (near Montréal), I also had plenty of time for introspection, and I came to the realization that I had a profound fear of failure.

This fear, combined with the indifference I had for my program, meant that I wasn’t really trying. I was making the classic mistake of ensuring mediocrity rather than risking failure. I had coasted through school up until this point, and UW was the first intellectual challenge I’d ever faced.

I think lots of the students in the audience could relate to that. I’m not the first person to struggle at UW, and no doubt many in the room had gone through or were busy going through something similar. I hoped that hearing someone talk openly about his experiences would help them to examine their own situations.

At that point in my life, I had to make a decision: go back and take on my program, or switch to something else. Frankly, I didn’t know what else I’d do, and a Computer Engineering degree from UW isn’t the worst thing in the world (plus my experience at the space agency had me considering an aerospace path), so I decided to suck it up and get through the next five years. That’s right, I was pretty sure I’d continue to dislike my program, but I committed to another five years of it anyway – the only difference was this time I was gonna kick it’s ass.

Upon returning to Waterloo, I was happy (not in an evil way) to see about a dozen of my classmates were also repeating the term. We banded together to study and work on projects, and over the term I developed effective work habits and turned things around academically.

I also took on a part-time job working 20-30 hours a week at the university’s arena (driving the ice resurfacer, hell yeah!). I think I was the only student in my class with a part-time job, and at the very least I’m confident that I was the only one working those hours, and that it was the coolest job. I kept this job for a few years, until another one got in the way (hint: foreshadowing).

Personally, I perform better when I’m under the gun, so the job gave me a break from school, but made sure that I used my time wisely. It also helped me learn that I could get out of bed at 5:30am to flood the ice, but there was no way in hell I was getting to campus for an 8:30am class.

Over the coming terms, I also got involved in some campus groups, mostly around career stuff like delivering résumé workshops and interview training. 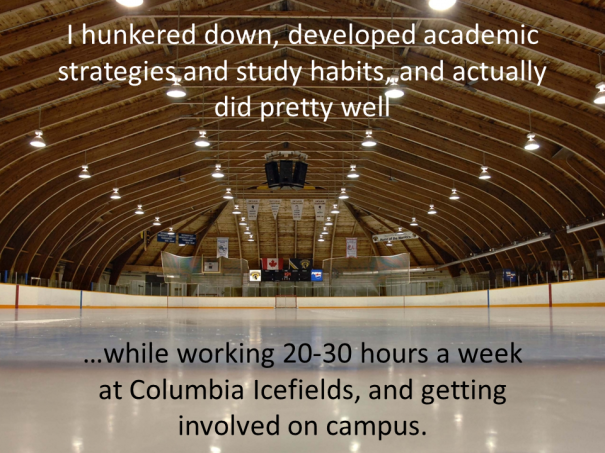 Inside UW’s Columbia Icefields arena. Occasionally, I’ll have a dream in which I’m flooding the ice once more.

In my fourth year, I started playing soccer in a local men’s league – a league I still play in to this day.

While I was never the top student in my class, I was doing well, and had found a nice balance between work, school, and other interests.

Lots of folks in the audience found this a bit unbelievable or annoying: at that point in their academic lives, they were feeling as overwhelmed as I had when I was in their shoes, and I was up there talking about adding more things to the schedule. To me, though, balance was more important than being at the very top, and my experiences have convinced me that balance makes me better.

In fact, I pretty much stopped attending classes from third-year on, as my roommate (Duong) and I hit our stride in terms of studying the material on our own and basically only showing up for labs and exams. There was a funny moment in a 2B calculus final in which I asked the prof about a topic that I’d never seen before, and he’s like, “Oh yeah, that isn’t in the textbook, but remember that we covered it in class a few weeks ago.” Naturally, I did not. Damnit (heading into the final I had the top mark in the class…coming out I did not)!

I also had a Management Science class in fourth year for which participation in tutorial session discussions and debates was worth 10% of the grade – the TA had trouble believing that I was willing to completely waive that 10%.

While I was never the top student in my class, I was doing well, and had found a nice balance between work, school, and other interests.

Duong and I also both completed the Mechatronics option, so we’d even kind’ve gone above-and-beyond in terms of academics. Who knew, right?

I graduated in 2006 after six years and eight co-op terms (a convenient side-effect of repeating the 1B term), one sixth of a percentage point in my overall average away from “with Distinction” (damn those waived participation marks!).

The journey was long and tough, but that made me stronger. Not once in my professional career have I faced anything that has even remotely stressed me out the way that UW did.

Fun fact: this was an actual flight route during which I had acute, painful, violent, explosive food poisoning. My stomach started gurgling ominously before we’d even taxied out to the runway. That was not a fun 26ish hours. Damn you, airport salad!

Fortunately or unfortunately, the ongoing effects of that time are still felt: I’m a compulsive worker who has extreme difficulty relaxing (although I’m trying). Thankfully, I haven’t had an exam nightmare in a few years, but I have friends who still do.

After finishing my last exam, I took about three days off and then stepped right into my current career path.

Actually, that path was already well underway: I’d held the job for 16 months already, and finishing school just meant that I didn’t have to pop down to campus every few weeks.

How had I set things up so nicely for myself? What was my career progression up to that point? I’ll tell that piece of the story in part three.

Leave a Reply to Sharing my experience with today’s students | Leadership, Marketing...and Everything Cancel reply