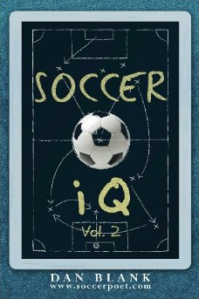 “I promised myself that I wouldn’t release a Volume 2 unless I cultivated enough quality content to truly justify its existence. I wasn’t going to throw together some rubbish and hope that the second volume would ride the coattails of the first just so I could make a buck. If I was going to put out a sequel, I would only do it with a clear conscience. The question I asked myself was this: If Volume 1 never existed, would this book be good enough to stand on its own? I believe it would.” (Soccer IQ Vol. 2 – p1)

Origin: I discovered Soccer iQ Vol. 2 while writing the report for Soccer iQ, and ordered it immediately.

Summary: In Soccer IQ Vol. 2, Dan Blank follows up his terrific Soccer iQ (a collection of 54 lessons and tips that every player and coach should know) with another 49 lessons and tips. As before, these new lessons exhibit enormous diversity, and cover both on-field and off-field topics.

Once again, the lessons are short and specific, and are therefore easily understandable. Each is explained with great clarity, including the ever-important “why” (as in, why this tidbit matters), and Blank includes a Note for Coaches component in each one. Where the lesson is something that can be drilled during practice, he includes helpful diagrams and instructions.

What Blank said in the original Soccer iQ (p1-2) still stands: “This book isn’t about soccer technique. This book is about soccer decisions that take place during the course of a match. These concepts are in no particular order. All of them are important and any one of them could provide your team with the margin of victory. Mostly, this book is a collection of soccer nuggets. The value of each nugget can be big enough to win a game or even a national championship, but conceptually they are very basic.” (p1-2)

My Take: After finishing the first book, I tweeted that, “Soccer IQ is easily the best soccer tips and tactics book I’ve read.”

I extend that sentiment to Vol. 2, and really see them as one extensive set of lessons.

Read This Book If: If you play or coach soccer, and want to improve at either, or even if you just want to better understand what you see on the television.

Note: due to the sheer diversity of the lessons in Soccer IQ Vol. 2, and their already quite-summarized nature, I’m not going to do my normal notes and quotes thing; instead, I’ll just highlight some of the lessons that I personally found particularly interesting.