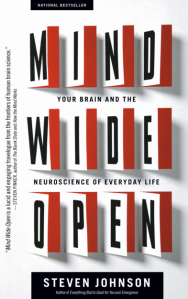 “So this is your brain, in all its multiplicity. You are part reptile, part mammal, part primate, part homo sapiens. you are a twitchy amygdala; you are a dopamine fiend; you are under the spell of oxytocin. You are an unthinkably complex series of connections, of links, spun together by your genes and by your lived experience. You are a walking assembly of patterns and wave, clusters of neurons firing in sync with one another. You are both one and many at the same time.” (Mind Wide Open)

Title: Mind Wide Open – Your Brain and the Neuroscience of Everyday Life

Origin: After reading How We Got To Now, I bought Steven Johnson’s entire catalogue.

Summary: In Mind Wide Open, Steven Johnson takes us on a journey through the human mind, and the brain within which the mind manifests. Part anatomy lesson, part neurochemistry introduction, part psychology primer, Mind Wide Open explores the greyish goop between our ears.

Johnson introduces us to the underlying structure of our brain, and explains how the component parts come together and communicate to create our moods, memories, phobias, emotions, and more. This journey takes bounces us between the latest brain science, the historical foundations of Freudian psychoanalysis, and the evolutionary roots of our home sapiens brain, with stops in a wide range of related disciplines.

Lest this mixing of neuroscience and psychology offend you, Johnson explains the title in the first entry in the Notes section at the back of the book:

There is a widely recognized distinction in the brain sciences and in psychology between “mind” and “brain.” The former refers to the experiences we have direct access to – drives, sensations, fears, memories – while the brain is everything behind the curtain: neurons and neurotransmitters and synapses. One way of thinking about the relationships between the two – using language from my last book – is to consider the mind an emergent property of the brain: a whole that is somehow greater than the sum of its parts. So the title is not intended to suggest a focus on mind over brain, but rather an opening up of the mind that lets us see the brain’s activity in new light.

My Take: While Mind Wide Open didn’t keep me nearly as captivated as How We Got to Now and Emergence, I still found it enlightening and enjoyable. I think it really comes down to my own interest in the topic: I’m somewhat interested in neuroscience, but not especially interested, so Johnson’s longer explanations and examples – things that would probably be welcomed by the avid reader – were, for me, needles extensions.

That said, I did enjoy the subject matter; it just got a bit detailed and long at times…for me.

I tend to be quite introspective, and I understand my self, my moods, etc. quite well. What Mind Wide Open added to that understanding is a breakdown of the brain components and the chemicals involved.

I should also say, though, that I did particularly enjoy the section on attention, and read several of the topical pages a few times (perhaps due in part to me reading that part on a flight, so I was finding it hard to focus…how very appropriate).

[As a fun aside: on that same flight mentioned above, the gentleman next to me saw the cover and asked what I thought of the book. It turns out that his daughter is a neuroscientist.]

Read This Book If: …you want to gain a deeper understanding of your ‘self’, both mind and brain, and all the wonderful components (both psychological and anatomical).

“It turns out that one of the human brain’s greatest evolutionary achievements is its ability to model the mental events occurring in other brains…Mindreading is literally part of our nature.”

“Our emotional state skews our sense of perspective by seeking out memories that match our current mind-set instead of a balanced, representative sample.”

“You are both one and many at the same time.”