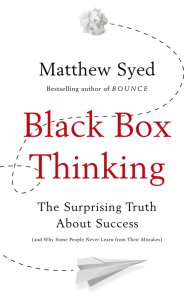 “And this is invariably how progress happens. It is an interplay between the practical and the theoretical, between top-down and bottom-up, between creativity and discipline, between the small picture and the big picture. The crucial point – and the one that is most dramatically overlooked in our culture – is that in all these things, failure is a blessing, not a curse. It is the jolt that inspires creativity and the selection test that drive evolution.” (Black Box Thinking)

Title: Black Box Thinking – The Surprising Truth About Success (and Why Some People Never Learn from Their Mistakes)

Origin: There are two reasons why I read Black Box Thinking. First, I’d picked up Matthew Syed’s first book, Bounce, on a whim – and loved it. I’ve subsequently recommended it to many friends and colleagues. So, by default I’m interested in what Syed has to say. Second, and not coincidentally, I’ve read a great deal about ‘success’: what it means, how it’s achieved, the factors involved, the role of luck, and so on. Black Box Thinking promised to add to that trove of information and insight. I want to learn from my own failures and from the failures of others, and I want to make use of that knowledge both as an individual and as a member of or leader of organizations.

Summary: Learn from your mistakes!

OK, so there’s a bit more to it than that, and I don’t provide that simple summary above to be flippant or cavalier.

“The purpose of this book is to offer a radically different perspective. It will argue that we need to redefine our relationship with failure as individuals, as organisations, and as societies. This is the most important step on the road to a high-performance revolution: increasing the speed of development in human activity and transforming those areas that have been left behind. Only by redefining failure will we unleash progress, creativity and resilience.”

“This, then, is what we might call ‘black box thinking’. For organisations beyond aviation, it is not about creating a literal black box; rather, it is about the willingness and tenacity to investigate the lessons that often exist when we fail, but which we rarely exploit. It is about creating systems and cultures that enable organizations to learn from errors, rather than being threatened by them.”

To build, illustrate, and argue his case, Syed structures the book into six parts:

My Take: While I was reading Black Box Thinking, I kept mentioning it to people. That’s a pretty strong sign that a book is really resonating with me. In some cases, I was sharing some of the specific examples (e.g., the Unilever nozzle, some of the justice system points, contrasting healthcare with aviation, etc.), and in other cases it was the more general concept.

I remember distinctly speaking with a colleague about cognitive dissonance, and how loathe people are to change their minds about something when their egos are involved; the colleague and I were both perplexed, as we each identify with a growth mindset, rather than an, “I have to be right all the time!” mindset.

Anyway, what does this rambling represent? Most likely: that I like and recommend Black Box Thinking, and that I think folks in all manner of walks of life (hey, that’s you!) could benefit from understanding its ideas and recommendations.

Read This Book If: …You want to help create organizations that learn from mistakes, or at the very least want to be able to understand why many organizations (and people) don’t.

“A progressive attitude to failure turns out to be a cornerstone of success in any institution.”

“You have to take into account all the data, including the data you cannot immediately see, if you are going to learn from adverse incidents.”

“Failure is inevitable in a complex world. This is precisely why learning from mistakes is so imperative.”

“The difficulty with (accepting our original judgements as being wrong) is simple: it is threatening. It requires us to accept that we are not as smart as we like to think. It forces us to acknowledge that we can sometimes be wrong, even on issue on which we have staked a great deal.”

“Lying to oneself destroys the very possibility of learning. How can one learn from failure if one has convinced oneself that a failure didn’t actually occur?”

“Intelligence and seniority, when allied to cognitive dissonance and ego, is one of the most formidable barriers to progress in the world today.”

“We are so eager to impose patterns upon what we see, so hardwired to provide explanations, that we are capable of ‘explaining’ opposite outcomes with the same cause without noticing the inconsistency.”

“Clinging to cherished ideas because you are personally associated with them is tantamount to ossification. As the great British economist John Maynard Keynes put it: ‘When my information changes, I alter my conclusions. What do you do, sir?'”

“Marginal gains is not about making small changes and hoping they fly. Rather, it is about breaking down a big problem into small parts in order to rigorously establish what works and what doesn’t.”

“Creativity not guided by a feedback mechanism is little more than white noise. Success is a complex interplay between creativity and measurement, the two operating together, the two sides of the optimisation loop.”

“True ignorance is not the absence of knowledge, but the refusal to acquire it.” – Karl Popper