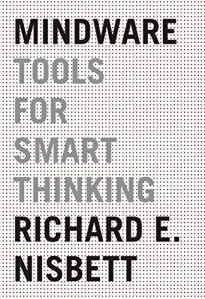 “Society pays dearly for all the experiments it could have conducted but didn’t. Hundreds of thousands of people have died, millions of crimes have been committed, and billions of dollars have been wasted because people have bulled ahead on their assumptions and created interventions without testing them before they were put into place.“ (Mindware)

Summary: Mindware is a crash course in becoming a better thinker.

Nisbett breaks the book down into five sections, each of which gives the reader a set of practical tools and important lessons to aid with cognition.

My Take: I found Mindware to be a valuable book: it reinforced quite a few things that I already knew (I’ve had a fair amount of statistical and scientific training, plus I’ve read about many of the topics covered) and introduced me to some new concepts, ideas, and techniques. Plus, it caused me to come to the conclusions that I put too much stock in multiple regression analysis, so I’ll have to look out for that in future.

I’ve recommended Mindware to a few people who I think would appreciate its contents and benefit from or make use of its crash-course nature.

I also appreciated the little thought experiments and illustrative examples used throughout, as they really drove home some points. For instance, I’m reminded that I need to pay attention to larger contexts, rather than diving into details. Annoyingly, this point was reinforced on a recent vacation, when I visited a friend and noted some interesting artwork on his wall but failed to put the pieces together into a whole. ARGH!

Mindware isn’t a short read, and might overwhelm folks who don’t hold genuine interest in the subject, but it’s definitely a great way to decrease credulity, to increase skepticism, and to provide the tools we need to critically evaluate the overwhelming amount of information (and opinion masquerading as fact) that we encounter every day.

Read This Book If: …You want to be a better thinker.

Part I: Thinking About Thought

“A full appreciation of the degree to which our understanding of the world is based on inferences makes it clear how important it is to improve the tools we use to make those inferences.”

“The best predictor of future behavior is past behavior. You’re rarely going to do better than that. Honesty in the future is best predicted by honesty in the past, not by whether a person looks you steadily in the eye or claims a recent religious conversion.”

“The fundamental attribution error gets us in trouble constantly. We trust people we ought not to, we avoid people who really are perfectly nice, we hire people who are not all that competent – all because we fail to recognize situational forces that may be operating on the person’s behavior. We consequently assume that future behavior will reflect the dispositions we infer from present behavior.”

“Part of the reason conscious consideration of choices can lead us astray is that it tends to focus exclusively on features that can be verbally described. And typically those are only some of the most important features of objects. The unconscious considers what can’t be verbalized as well as what can, and as a result makes better choices.”

“The most important thing I have to tell you – in this whole book – is that you should never fail to take advantage of the free labor of the unconscious mind.”

“Calculations of the value of a human life are repellent and sometimes grossly misused, but they are often necessary nonetheless in order to make sensible policy decisions.“

“Do by all means perform your cost-benefit analysis for the decisions that really matter to you. And then throw it away.”

“Policy makers who are not economists often spend your money for no better reason than to rescue money they’ve already spent… That bad money is sunk. Even more sinister is the politician who urges continuing a war, putting more lives at risk, ‘so that the fallen shall not have died in vain.'”

“I can’t stress enough how important it is to actually collect data in a systematic way and then carry out calculations in order to determine how strong the association is between two variables. Just living in the world and noticing things can leave you with a hopelessly wrong view about the association between two events. Illusory correlation is a real risk.”

“To bring home the lesson of the interview data: Given a case where there is significant, presumably valuable, information about candidates for school or a job that can be obtained by looking at the folder, you are better off not interviewing candidates.

“Society pays dearly for all the experiments it could have conducted but didn’t. Hundreds of thousands of people have died, millions of crimes have been committed, and billions of dollars have been wasted because people have bulled ahead on their assumptions and created interventions without testing them before they were put into place.”

“Programs that damage young people being conducted, and programs that help are underused or used not at all. Society is paying a high price in dollars and human suffering for wrong assumptions.”

“What’s unethical is not to conduct experiments when they’re feasible.”

“The truth is, the answer to just about every question concerning attitudes and behavior can be pushed around – often by things that seem utterly fortuitous or silly.”

“We aren’t obligated to pay attention to theories that are untestable. Which isn’t to say we’re not allowed to believe untestable theories – just that we need to recognize their weakness compared to theories that are. I can believe anything I want about the world, but you have to reckon with it only if I provide evidence for it or an air-tight logical derivation.“

“I want to make two things clear at the outset. First, I don’t know whether computers will ever be able to do those things. Second, I’m the only person in the room with a right to an opinion on the question.”